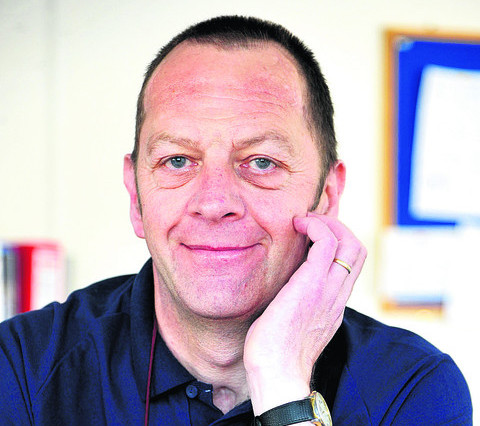 WHEN fit and healthy dad Steve Smith began to suffer severe headaches back in 2008, little did he know that his life was about to change forever.

When the pain suddenly became excruciating, Steve’s wife Jean called an ambulance and he was taken to Great Western Hospital where a scan showed he was having a brain haemmorhage.

Three brain bleeds later, and after twice being declared dead, Steve underwent a 10-hour operation to remove half of his skull.

He spent 10 months in hospital at GWH, the John Radcliffe in Oxford and Frenchay in Bristol before returning home, where he had to wear a helmet for a year before the half of his skull that was removed was put back.

But Steve, of Moredon, was forced to start again from scratch, having lost all the basic skills most people take for granted.

“I don’t remember anything that happened but I am told I wasn’t feeling well and was off work for two weeks, which was unusual for me because I worked all my life,” he said.

“If my wife hadn’t called the ambulance when she did, I wouldn’t be here to tell my story.

“All I remember is waking up. I couldn’t walk, talk, I lost some of my eyesight, I forgot who my family members were, everything in my past – I couldn’t remember my own wedding.

“They don’t put the other half of your skull back in straight away so I spent a year wearing a safety helmet, and I used to get quite frustrated because people would just stare at me because they didn’t know what it was.”

He was referred to Headway Swindon and District, part of a national charity that supports survivors of brain injury and he has since regained the majority of the skills he lost.

“I had never heard of Headway before but I had no reason to,” he said. “The support they have given me has been fantastic, I would never have done it without them.

“The first thing I did when I came to Headway was learn how to write my own name again. I did a lot of work with handwriting, spelling and maths skills.

“My wife and daughter would bring in photos from family events in my past and I would have to try and remember who the people were and what they were doing.”

Steve attends Headway twice a week and has come a long way from his first appointment when he was unable to even say his own name.

Sheryl said: “He has done very well. He is working on quite complex things from where we started and it is down to his determination. Every time he chooses what he wants to work on next, he has the determination there that helps him conquer it.”

Headway will be hosting a soccer supper night at the County Ground on April 3 from 7.30pm to 11.30pm with famous Arsenal footballer, self-confessed alcoholic and after dinner speaker Paul Merson. Former Town player Phil King will be compering and there will be raffles, games and prizes. For tickets call Sharon Fearton on 01793 617109 or 07876 524930.

Meanwhile, customers and staff at Sainsbury’s Bridgemead presented a cheque for £6,600 to Headway Swindon and District as its charity of the year.

They raised funds through quizzes, raffles and also donated money raised through wrapping for Mother’s Day and Valentines Day.

Simon Belcher, from the store, said: “We’re here to help the local community so it’s about local charities and local branches of charities.”