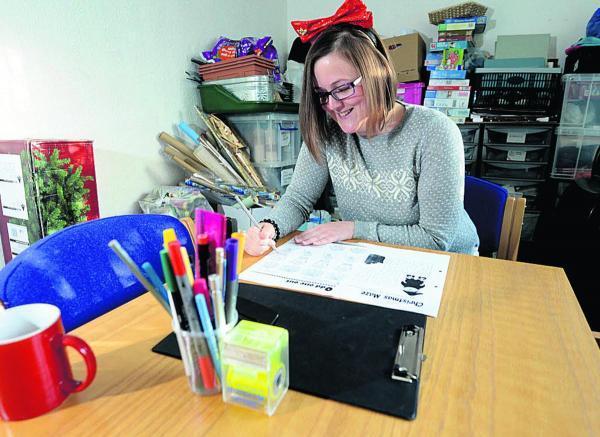 Life may stop in a heartbeat but Ruth fights back

RUTH Hillier lives each day with the knowledge that her heart could give in at any time.

And yet when she considers how her life was brought to abrupt halt just three years ago, she is determined to make every moment count.

Locked inside her body, unable to communicate and confined to a hospital bed, Ruth was deemed a lost cause by doctor when she suffered a major stroke following heart surgery.

Despite the bleak picture they painted, step by step she learned to speak, walk, dress herself and regain control of her life again.

Her life was thrust in a downward spiral when her brother David was rushed to hospital struggling to breath in 2008. Surgeons spotted an abnormality which had caused his aorta, the artery connected to the heart, to split. He received surgery and his family were tested for the genetic disorder.

Both Ruth, then 29, and her mother were found to carry the mutant gene responsible for the aorta’s propensity to split and, eventually, heart failure.

Conscious that her time could run out suddenly, she quit her job as a homelessness officer and travelled to Australia, with her doctors’ blessing.

“It makes you think about your life differently,” said the 35-year-old from North Swindon. I thought ‘Whatever is going to happen will happen’. It was part of me. So I thought I might as well enjoy my life.”

While in Sydney, the sword dangling over her family finally struck. In July 2011, her brother was again rushed to hospital but this time doctors were unable to save him. He was just 28 years old.

“I was in floods of tears,” she explained. “I was in shock and on the other side of the world. Everything crashed around me.

“When I got back I booked an appointment at the hospital in Bristol to make sure everything was OK. They did some scans and said my aorta was ready to split. If this hadn’t happened to my brother, I would not have got tested and found out.”

Still grappling with her sibling’s death, she underwent surgery in October 2011. A metal valve was attached to her heart and part of her aorta was replaced.

She left the operating theatre out of immediate danger. Then, in the recovery room she suffered a stroke. Her mother was told there was little hope for Ruth – in all likelihood she would spend the rest of her life bedbound and fed by tubes.

“They make you sign all these consent forms and you see that there is a risk but you never think it’s going to happen to you. I just chose not to think about it. My brother had died and I was in a bit of a daze.”

Ruth has no memory of the months that followed, only the accounts her mother and relatives have shared with her since.

She spent two months in Bristol, unable to speak or walk. She was then transferred to the SWICC ward at the Great Western Hospital.

“I felt very scared. All I remember of SWICC is the colour of the walls. Even after two months I couldn’t speak, couldn’t tell the time, read or write. Everything I took for granted disappeared. I couldn’t understand where I was. My mum told me that all I could say was ‘Yep’. I was in pain. I could hear this clicking sound in the back of my mind. I only realised after a while that it was the valve they had replaced.”

Over the next three months, she slowly learnt to speak again with regular speech therapy. She also received physiotherapy to teach her to walk. But, throughout the recovery process, she struggled to get to grips with her condition.

“Even at that point I didn’t really grasp what had happened to me. I was trying to cope with the pain and the trauma of my operation. I had to put dealing with my brother’s death to one side. I had to relearn how to wash myself, brush my teeth.”

As she gradually recovered and the events that followed her stroke began to make sense to her, the enormity of the task ahead– rebuilding her life and herself again from scratch – hit her with full force. Confusion and uncertainly left way to anger and resentment.

“I became aware of what had happened. That hit me emotionally. I was so angry at the world. Everything I knew disappeared. I would try to say something and it would come out backward or I would use the wrong words. And my aorta could split again at any time without warming. There was nothing they could do about it.”

Frightened and adamant she would never lead a normal life again, Ruth followed a strict routine at home, locking herself away from the world.

But her outlook on life changed dramatically when she was referred to brain injury charity Headway Swindon and District. The first time she walked through the centre’s door was the day she regained control of her life again.

After a few tentative weeks, she started working on her spelling, maths skills and was given tailored memory exercises.

“At first I would not go; I just couldn’t accept what had happened to me. I had this routine at home, carers coming to help me get washed and dressed. But I tried it on a two-week trial at the start of 2012. I remember my first day. Lucy my support worker did an assessment to see what I was able to do. She asked me to count on my hands. I remember staring at my hands thinking ‘I know I’m supposed to do something but I don’t know what’. It took me quite a few weeks to go properly. But I started to realise they were trying to help me and how it would benefit me in the long run. My speech improved quickly. I could see I was getting better and that motivate me. Eventually I got to a point where I didn’t need carers at home. Headway helped hugely. If it hadn’t been for Headway I would not have had the confidence to go out the front door. ”

Ruth, who started volunteering at radio station Swindon 105.5, is under no illusion that the road to recovery will be without struggles. But she has made a conscious decision to look to the future not dwell on the past or the heart defect which could take her life at any time.

“I try not to think about my aorta splitting too much otherwise I couldn’t live. I would go loopy.

I am a completely different person now. Brain damage won’t repair itself so you have get to that stage where you can accept what’s happened. It might be that this is as good as it’s going to be but at least now I’m more in control.”