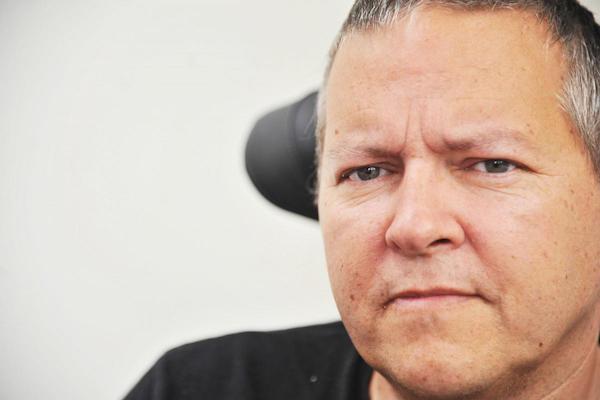 Former paratrooper Josh King tells MARION SAUVEBOIS about his dice with death at the hands of the IRA in the 1980s, his fightback to good health after being hit by three strokes and how he has no time to feel sorry for himself after his latest blow – being diagnosed with motor neurone disease

PATROLLING the streets of Belfast, Josh King’s unit was ambushed by IRA fighters lying in wait.

All around him soldiers “fell like dominoes”. Although severely injured himself, he bolted to their aid under the relentless pelt of enemy fire. Only four out of the 11 servicemen on duty made it out alive that day in 1985. The attack riddled Josh’s listless body with 21 bullets, left him on death’s door, prone for two years and ultimately wheelchair-bound. And yet, if reliving the ordeal meant he could be spared the three strokes which, 25 years later, would reduce him to a frozen shell, he would do so without hesitation.

“Personally I would go through the attack,” says the father-of-seven resolutely. “I look at my left arm and leg and I know they are there, they’re technically mine but they don’t feel like they belong to me. I never felt like this as a soldier, even when I came out of the convalescent home. It’s only since the strokes.”

Josh suffered his first stroke in 2009. It was relatively mild and did not seriously impact him long-term. But two further strokes in 2012 and 2013 left him severely disabled. Unable to speak, or so much as move an inch, the garrulous no-nonsense extrovert he once was had gone. He was robbed of himself, he explains.

“I don’t remember much, just being very frightened. My left side completely went, I couldn’t feel anything and everything went dark. I came round in intensive care and found I had been there three weeks. I couldn’t speak,” says Josh, from Wroughton, in his warm Cockney drawl. “You can’t even write thing down like, ‘Can I have tea?’ Your brain is in conflict with your body and you get really frustrated. I couldn’t even form anything in my head really. I couldn’t always understand what was going on and what other people were saying.”

Watching him chatter on, segue into anecdotes of his days in the East End, cuddling a newborn Danny Dyer and breaking bread with Ray Winstone, it is almost impossible to imagine the semi-professional singer petrified in his own body, communicating with the outside world through grunts and groans.

After months in limbo, he was referred to brain injury charity Headway Swindon & District in 2013. There, he slowly learned to form words again, feed himself and reclaim his damaged self.

It took two years for Josh to utter a single sentence.

His first words were to his wife.

“I said ‘I love you’ and she hasn’t been able to shut me up since,” chuckles the 56-year-old. “I don’t think I’d be where I am now if it wasn’t for Headway. They helped me a lot. I didn’t think back then I’d be back singing or doing all the things I’ve done. But I tried hard. I didn’t want to be trapped in this body. I didn’t want to spend my life with people talking over me.”

Despite the strenuous months of re-education and his ongoing struggle to claw back the mental skills he once took for granted, he is disarmingly positive and completely devoid of bitterness.

“I’m not going to sit there for the rest of my life and say, ‘Oh look at me,’ he says dismissively, scrunching up his face feigning tears. “You go through stages of emotions, anger, frustration, crying, screaming but it all leads to one thing, and it’s acceptance.”

He, more than anyone, would have cause to feel hard done by. The grandfather-of-eight was dealt yet another blow last year, when he was diagnosed with motor neurone disease – a fatal, rapidly progressing condition which attacks the nerves that control movement so muscles no longer work. MND leaves people locked in a failing body, unable to talk and eventually breathe. It kills more than half of patients within two years of diagnosis.

“When we found out my wife burst into tears but I just looked at my watch,” he says without missing a beat. “You can climb to the top of a mountain and scream and shout but when you come down you’re the same person, nothing has changed. It’s wasted energy. There are many people far worse off than me. I don’t want sympathy.

“When people ask, ‘What are you going to do now that you have MND on top of everything else?’ I just say, ‘I will be like Stephen Hawking without the intelligence,’” he deadpans.

Josh began suspecting something sinister was at play a year and a half ago, when suddenly the simple act of gripping a pen or picking a fork demanded an extraordinary effort.

It is likely the aftermath of his successive strokes masked the tell-tale symptoms of the MND, perhaps for years.

“Had I been able to walk from day one, they probably would have been able to diagnose the MND. The fact that I constantly feel like I’m going to choke was put down to the stroke but actually it’s the MND. Sometimes I wake up in the morning and I think maybe that was just a dream but it’s not going anywhere,” his voice trails off. He soon perks up, shifting the conversation back to the months of speech therapy which followed the strokes, likening himself to Audrey Hepburn in My Fair Lady.

Never one to wallow, the former Para refuses now more than ever to allow another setback to hinder him.

“I’m still the same person,” he grins. “I know what’s ahead of me and I don’t have time to feel sorry for myself. You can’t live your life like that. There are too many things to do, people to meet.”