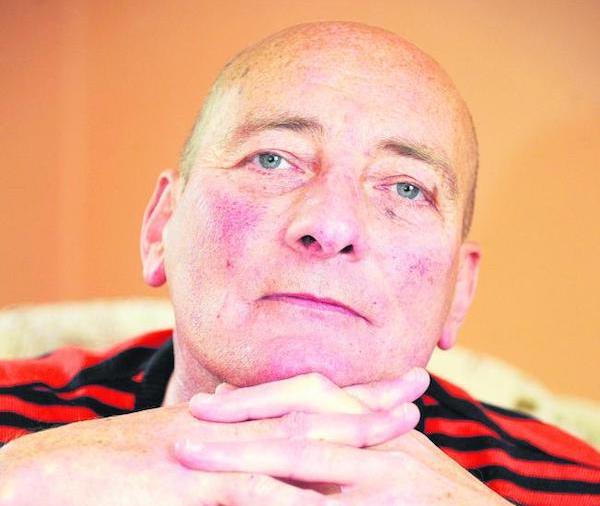 After illness, Ken is making Headway

AT THE height of his illness in 2007, Ken Williams, a previously active man with a cheeky sense of humour, was a shadow of his former self – bedbound, unable to speak or even recognise his partner.

Within a few weeks the 60-year-old from Penhill was diagnosed with cerebral lupus on the brain, a condition so rare Ken believes he is one only of two people affected in the UK.

The first sign something was deeply wrong had appeared 10 months previously when he suddenly started swerving between lanes behind the wheel for no apparent reason.

Soon his personality began to change dramatically and he became prone to violent outbursts at work and prey to debilitating headaches, chest pain and uncontrollable twitching.

He was diagnosed with depression and prescribed medication but the symptoms worsened until he was rushed to hospital.

“After an outburst at work his colleagues took him home and when I came home his underwear was in the living room, there was mouldy food from sandwiches I had made that he hadn’t taken to work,” said his girlfriend Kim Baillie.

“I took him to hospital and they did an ECG test but it came back ok so they sent him home.

“A week after it got bad, he couldn’t even walk. I took him back and he spent four weeks in hospital. He just lay there like a zombie. He didn’t move, didn’t speak and he didn’t remember me.”

The diagnosis was only the start of the gruelling recovery process. Ken underwent chemotherapy treatment for nine months.

In the meantime the condition, which caused an inflammation of the brain and nervous tissue, had taken its toll to such an extent that he had to re-learn to write, speak and walk again.

In 2008, he was referred to brain injury charity Headway Swindon. With the help of staff, he was able to regain some of the skills he lost.

“I couldn’t remember how to write, how to walk, and my speech was slurred,” said Ken, a former Motorola employee.

“I was excellent at maths but that was also out the window and it still is. It has affected my right arm and I still can’t hold a pen in my right hand.

“The condition has also given me bad blood circulation and affected my immune system, so I can’t fight any infection. It has changed my personality. I had mood swings and was so violent I had to go to an anger management course.”

As a result of his condition and staggered walk, Ken has been attacked in the past and asked to leave pubs by managers who confused his disability for drunkenness.

Seven years on, he still has a monumental task ahead of him to come even close to his former self. But he is hopeful for the future.

“Going to Headway really helped me,” he said.

“I can write now and I speak better and interactions are easier for me because I meet a lot of people there.

“It has been a long and very hard process and I don’t think I will ever go back 100 per cent. But I am hoping to get back some sense of normality. I think my life would be dismal without Headway and I am starting to get some of my personality back.”