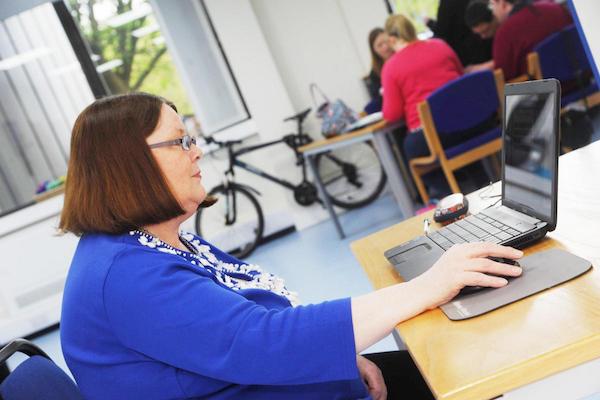 All I could do was cry, I’d lost who I was, says Elaine after suffering a stroke

FOUR years after suffering a severe stroke, which left her partially paralysed, 66-year-old Elaine Philpot from Ferndale tells Marion Sauvebois how she learned to stand, walk and speak again for her grandchildren.

“There were no warning signs.

It happened on April 24, 2012. I had been watching Neighbours and Home and Away when I decided to get up and go to the kitchen to make myself an evening meal only to find that I could not get up from the settee.

I was completely unable to move. I decided to kneel on the floor and get up from there. But, again, my left leg and arm were weak and I fell on my side. I knew something was wrong and that I needed to get to the phone. I struggled to slide from the wooden floor of the lounge onto the dining room carpet. I ended up getting stuck halfway across. There were chairs on the floor, furniture had fallen all over the place. I just gave up and fell asleep.

When I awoke daylight showed through the Velux ceiling window in my kitchen. Something must have spurred my brain into action because I noticed my handbag had fallen off a dining chair onto the floor and I remembered that my daughter had given me her old mobile phone with some Pay As You Go money for emergencies. Behind me was my twin granddaughters’ rocking horse with the curved bottom. I pushed it, got hold of the bag and pulled it towards me.

I called Niky and said: ‘Mum, help, stuck on floor, can’t get up.’ I did not realise my speech was slurred but she did, and she knew something was wrong. All I knew was that there was a lot of saliva in my mouth and I was drooling.

I do not remember her coming or the ambulance. By that time, it had been at least 17 hours since my stroke had occurred. They know now the stroke was caused by a blood clot in my neck, part of which broke off and went to my brain. As a result I suffered from hemiplegia, which paralysed the left side of my body.

I spent five weeks in hospital, on the Forest Ward at SwICC (Swindon Intermediate Care Centre), being hoisted out of bed, placed onto a rather hard and uncomfortable chair before being put to bed again for the night.

I felt I had lost everything; I had lost who I was. I couldn’t even swallow by myself or turn onto my side. All I could do was cry. Things gradually improved, my speech got better – being able to speak to my daughter and my family was a relief – and I was able to go home.

I had to learn to stand again and walk. I had two carers, and an occupational therapists called in each week to get me to stand with the use of a quad stick. I had a bed put in the dining room downstairs but I was determined to get upstairs to my own bed. After five months I was able to pull myself up the stairs one at a time and get undressed alone for bed.

I could not have done it without my family and my best friend and next door neighbour Lyn. She would take me into town on the bus with the wheelchair I had bought for myself. She helped me to get used to walking outside; first to one lamppost and back, then the second lamppost and so on until I could go around the block.

I remember the day I was able to lift the little toe on my left foot for the first time, two years ago. I just cried, I could not believe it. I was told by my GP at the time of my stroke that I would probably never get to use my arm and hand again, which was not a nice thing to hear when I was trying so hard to be optimistic about the my future.

But things improved. Now I can move my shoulder and elbow on the left side but my fingers do not have any grip. So I have had to learn to do everything with one hand.

Three years ago, a social worker mentioned brain injury charity Headway Swindon & District. I was not sure about it at first but In July 2013 I decided to give it a try and I have been going ever since.

I cannot thank Headway and the support staff enough for getting me where I am today. They have helped me get my confidence back and feel normal again. The brain exercises there are brilliant and have helped with my mental agility, thinking and planning.

I really enjoy the maths exercises too, because it was my best subject in school. I have learnt things I had partly forgotten.

These skills are there but you need encouragement to get them back, which is what Headway gives you. The conversation group brought me out of my shell and helped greatly get my speech back to normal.

I have planned a holiday on my own to Alaska in August – something I had wanted to do for many years. I will spend time in Vancouver, then four days watching grizzly bears, followed by six days on a cruise, hopefully seeing whales and the aurora borealis. On my return home, I’ll divert via Toronto to see an old school friend I have no seen for 61 years and I will go to Niagara Falls.

I am very excited but nervous at the same time because of my disability. I shall need the help of my daughter to pack since I find it very hard to fold clothing and I will be taking my walking aid and a shopping trolley which doubles as a seat when I need a rest.

It has taken a long time to come to terms with my situation. I still have my down times when I feel low and frustrated about the things I cannot do anymore. I still have a carer to check in on me, 30 minutes in the morning and 15 minutes at tea time.

I miss being useful and looking after my three grandkids. That is the hardest part. The plan when I retired as an IT administrator was to look after them after school when their mum worked. Only now they are getting a little older can I look after them for a few hours as they occupy themselves with their iPads. And it hurts that I cannot cuddle them. I can still lift my arm up their back to give them a bit of a squeeze but it is not the same.

But the bravery of my granddaughter Lori, who was born with a severe heart condition, encourages me to persevere. She will be nine years old this month and has already had several heart operations. Her stoicism makes me feel ashamed of my own self-pity. I am lucky to have my grandchildren. They give me the motivation to try harder.”

Since 1989 Headway Swindon & District has been supporting adults with traumatic and acquired brain injury, their families and carers.

The charity aims to enable brain injury survivors to regain and relearn skills that have become impaired including speech, memory, maths and the ability to cook and/or live independently. Every activity, exercise or course offered is geared to promote cognitive and social rehabilitation, and each user has an individual plan to enable them to meet their goals and achieve their potential.

To stay afloat and support brain injury sufferers across Swindon and Wiltshire, the charity needs £325,000 a year. While a large portion of this comes from council subsidies, £60,000 must be raised by the small team.